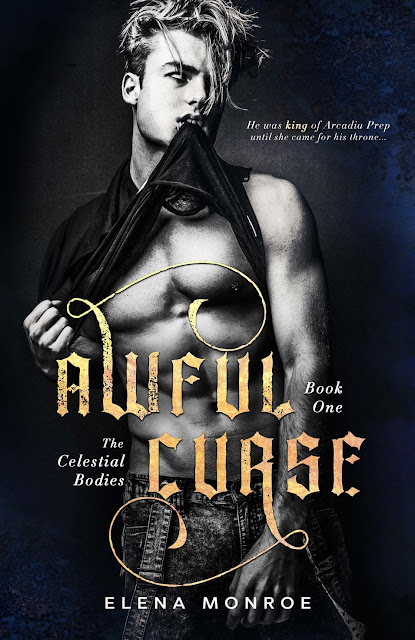 Title: Awful Curse
Series: Celestial Bodies #1
Author: Elena Monroe
Genre: Contemporary/Fantasy Romance
Cover Design: Maria, Steamy Reads
Photo: Michelle Lancaster
Model: Lochie Carey
Release Date: February 24, 2020
BLURB
He was King of Arcadia Prep until she came for his throne…
ARIANNA
We moved around a lot, too much.
The shine of my highly respected and decorated military dad’s badge wore off after I became heavy baggage.
I was the new girl thirteen times in two years and every time I had to tape up another box I grew more resentful. Forced to forget everyone I fell in love with, laughed with and bonded with.
For a certain price you could unburden yourself from your hormonal teen at Arcadia Prep too.
I’m reckless.
I’m impatient.
Purple hair, a don’t care attitude and my Doc Martens all screamed leave me alone, fending off any new relationships.
I vowed to keep my heart safe this time, locking it away right under my anger but he knew exactly where I hid the spare key – in his mysterious eyes the minute ours locked.
BOLTON
I was stuck – the essence of a God in some kind of limbo of high school.
I was meant for more than this.
Being king here meant nothing.
Arcadia Prep wasn’t for the weak. The expectations, the pressure, the standards, the success and privilege smug on everyone’s face wasn’t everyone’s cup of tea.
I thrived in chaos.
I’m fearless.
I’m ruthless.
The new girl was not my cup of tea.
She stomped her Doc Martens all over my tradition, rules and my reign.
We all have secrets. Mine were paper weighted down by my heavy crown.
Her violet eyes and her abrupt attitude spewed sass all over my black on black. She didn’t faze me until I realized she was after my crown…
GOODREADS LINK: https://www.goodreads.com/book/show/48508248-awful-curse
PRE-ORDER LINKS
US: https://amzn.to/2Hftqq8
UK: https://amzn.to/2uAUkWs
CA: https://amzn.to/2UJqVUE
AU: https://amzn.to/3boV161 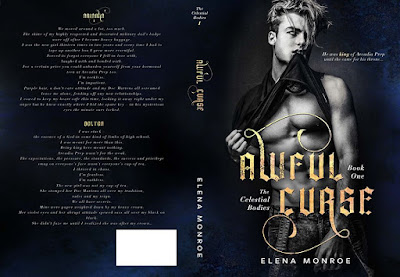 EXCERPT
BOLTON
I heard footsteps long before I reached the door alerting me someone was trespassing. Quietly I stood in the doorway searching the room for culprit when I should have guessed.
Arianna. New girl.
Her fingers danced on the surfaces as her curiosity took it all in. There was no way to warn people that I was in a dangerously ruthless mood, to warn her.
“You’re gonna graduate from new girl to felon if you don't start following the rules.”
She laughed and something about the casual attitude around the word felon made it seem like she knew trouble better than I did.
“Been there, done that, wasn't worth the t-shirt or the keychain.”
I plopped down in the chair I put there years ago now, tired of getting drunk and doing the same shit. I rather do it alone then with people I hardly like. That's why I come here to hide during parties.
She finally let eyes gloss over me and her face whines at the cut on my lip. I almost thought she physically got hurt, too bad suffering isn't transferable.
“What the fuck happened to you?”
That sounded like a real concern, in all it's displaced glory. Stern, demanding, even judgement - all here.
“Well, not that it's your business, but I finally got what I deserved for my mouth.”
She fearlessly walked right over to me standing between my legs and leaned down to get a better look. Her deep blues rimmed with violet to match her hair, reminded me of the sky when it got tie-dyed right before sundown, as she inspected my wound that stopped hurting the more I pushed the beer bottle to my lips over and over.
Better than the golden hour before the all the colors turned black and nothing was covered in the pretty filter. That summed up Arianna.
“Well deserved doesn't make it hurt less.”
She was wrong. It actually did.
“Are you gonna kiss it better?”
She actually half scuffed, half snorted with laughter like I wasn't being serious. I was in a despicable and semi-diabolical mood hellbent on the two B’s that teenagers values. Beers and Babes. The third B (bongs) was out since I couldn't get caught with shit in my system during a pee test.
Arianna wasn't half bad looking if I looked past her immature tantrum leading to her purple hair. Her skin shimmered like it was actually happy and her lips were almost always smiling. In this moment she was half goddess, but I couldn't forget she was always half Hell.
My own personal hell.
I let my hand touch her thigh so she knew I was serious even though I was slumped down and perpetually board.
“What are you doing? We hate each other remember?”
“Hate me tomorrow.”
AUTHOR BIO
Elena Monroe grew up in Florida scribbling down stories from a very young age. These stories were really just wavy lines filling the paper, but she knew each word, each emotion, each character's name, and there was no tricking her into forgetting what each line signified. Just like her unconventional way of writing as a toddler Elena is setting her own rules and just telling stories.
Much like her debut novel, The Best Years, life certainly imitated art. Transplanting from the South to the East Coast, Elena currently lives in Connecticut with husband, reformed bad boy.
Find her on her social media through Twitter at @elenamonroe, Instagram at @elenamonroewrites, Facebook at @elenamonroewrites, and more
AUTHOR LINKS
Instagram: https://www.instagram.com/elenamonroewrites
Facebook: https://www.facebook.com/elenamonroewrites
Facebook Group: https://www.facebook.com/groups/2307075255991016
Amazon: https://www.amazon.com/Elena-Monroe/e/B07Q41NHSK
Goodreads: https://www.goodreads.com/author/show/19007689.Elena_Monroe
Newsletter: https://mailchi.mp/9f9e97ec87f3/elenamonroewrites
Merchandise: https://mailchi.mp/44987f1e4f95/shopelenamonroe
Posted by Crni biser at 04:57